Rates for the Twin Cities, Duluth, and Morris campuses go back to 1960-61. Crookston rates go back to 1970-71 and Rochester to 2009-10, both corresponding to the year they first enrolled students.

Background
The University of Minnesota has many different tuition rates. In addition to the basic rates for undergraduate and graduate students, both resident and nonresident, there are separate rates for students in the professional programs of law, medicine, dentistry, pharmacy, and veterinary medicine, as well as special rates for many graduate programs (e.g., M.B.A., M.Ed., etc.).

Until 1999-00, when the University changed to a semester calendar, there were also multiple rates at the undergraduate level going all the way back to 1960-61. Until 1999-00, the University had a lower rate for lower division students and a higher rate for upper division students. For many years there were also different upper division rates for each college on the Duluth and Twin Cities campuses.

The tuition rates for undergraduate students on the Duluth and Twin Cities campuses in this history are the upper division rates for students in the College of Liberal Arts on each campus, since this is the annual rate that most students would have paid.

Students from Manitoba, North Dakota, and South Dakota pay Minnesota resident tuition rates under terms of the respective tuition reciprocity agreements that have been negotiated by the state of Minnesota.

Morris Campus
The nonresident rate for students on the Morris campus was eliminated in 2002-03. 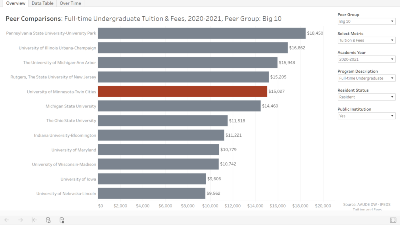